Linda Samuels – Someone You Should Know 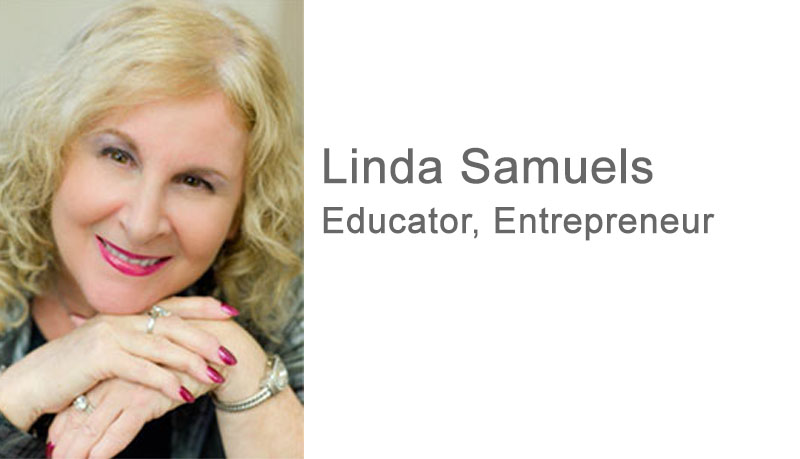 Linda Samuels has a rare psychological condition. She doesn’t hear the word no. It’s not that people haven’t said no to her. They have. Many times. She just turns it into an opportunity to re-invent herself. As a young woman growing up in Mansfield, Ohio, she had the grades and the desire to follow her father into the medical profession. Prevailing cultural attitudes changed the plan. It was, after all, still a man’s world and medicine was man’s work.

Linda didn’t become a doctor. Instead, she took her degrees (University of Cincinnati BA in biology and Masters of Science in population genetics) and moved to the Boston area and began a stellar career teaching biology at Dana Hall School in Wellesley, Massachusetts. Linda is no ordinary person and she was no ordinary teacher. During her more than 25-year tenure at Dana Hall, she was named Outstanding Biology Teacher in Massachusetts by the National Association of Biology Teachers, inducted into the Massachusetts Hall of Fame for Science Educators, and chosen as a finalist for the Presidential Award for Excellence in Mathematics and Science Teaching.

Seeing a Need and Filling It Most would call this a fulfilling career but Linda wanted more. Recognizing that biology textbooks were failing to get young girls motivated, Linda decided to write her own and published Girls Can Succeed in Science! One reviewer on Amazon had this to say about the book:

“This innovative book is a must-buy for all middle school and secondary science teachers and parents. Chock-full of unique classroom activities and demonstrations, and guided by a new philosophy for boys and girls that really works! You can tell it’s based on over 25 years of real classroom experience, and it’s fun as well as educational. This is a one-of-a-kind book that fills a special niche in the science book market, and fills it to a tea!”

See what I mean about Linda?

“I’ve had to reinvent myself and these men should have the opportunity to reinvent themselves too. As far as I was concerned, they started with a clean slate”

Recently, Linda designed and taught a course on entrepreneurship which she titled Passion to Profit. Nothing extraordinary here (not for Linda, anyway) except for one thing. Her students were inmates and her classroom was the library at the Pondville Correctional Center, a minimum security prison in Norfolk, Massachusetts. Did I mention that she is fearless?

Linda thinks big. She wants to change the world. BillionaireBabies, LLC, her latest and most ambitious project seeks to empower today’s children to become tomorrow’s leaders. She has already made significant progress toward her uplifting goal. Imagine teaching kids the importance of planning, budgeting, research and analysis and making it fun. That’s Linda’s gift. Better yet, imagine future generations of children growing into adulthood already knowing how to run a business, balance a checkbook, write a business plan, respect the environment and one another. Stephen Aveling-Rowe is one of these children. “I’ve got a new goal, new excitement,” says Stephen, adding that Linda’s BillionaireBabies program has taught him to act on his ideas, “not just let them sit in your brain.” Stephen Aveling-Rowe is 12 years old and lives in Australia.

It’s tempting to label Linda Samuels a “late bloomer.” Tempting but not true. Linda is always blooming. Not late, not early. Just constantly.

Note: This is a guest blog post written by Marvin Kane. Learn more about Marvin here.